Map Showing the Land Grants of the St. Louis, Mountain and Southern, Little Rock and Fort Smith Railways in Arkansas

Printed color map of Arkansas showing land grants of the St. Louis, Mountain and Southern, Little Rock and Fort Smith routes. The map states that two million acres of Arkansas have been adapted to farming grazing, fruit growing and timber and that the land is sold in tracts to suit the purchaser.

Many Arkansas towns were originally founded as railroad towns, and railroad companies' offers of land brought many settlers to the state. The St. Louis, Iron Mountain and Southern Railway was a historic railroad that operated in Missouri, and Arkansas during the late 19th and early 20th centuries, running from St. Louis, Missouri, to Texarkana, Arkansas, as well as to southeast Missouri.

The Little Rock and Fort Smith Railroad was a railroad that operated in the state of Arkansas between 1853 and 1875. The business was plagued by financial difficulties, and was bankrupt by 1874. It came to national prominence when its bonds were the subject of a scandal involving Republican presidential candidate James G. Blaine in 1876. 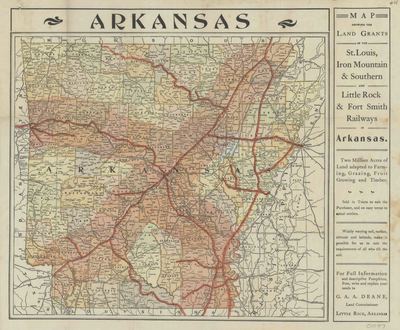