Printed color map of Arkansas's surveying district showing the extent of public surveys on September 30, 1843. The surveyed exteriors are indicated by black lines and subidivided townships are indicated by the letter S.

Arkansas became part of the United States when it was included in the Louisiana Purchase in 1803. It became a territory in 1819 and achieved statehood in 1836.

William Pelham had moved to Arkansas Territory with his older brother in 1820. By 1821, Charles was Deputy Surveyor for the U.S. General Land Office, and employed his younger brother as a chain carrier in 1826. While William gained extensive experience in the surveying field, his career was greatly furthered by nepotism and political favoritism. It was mostly the latter which in June 1830 caused President Andrew Jackson: "Reposing special Trust and Confidence in the Ability and Skill of WILLIAM PELHAM of Arkansas" (sic), to appoint him to survey the boundary between Arkansas Territory and Louisiana. His action came on the heels of an appointment of James Conway as Boundary Commissioner. 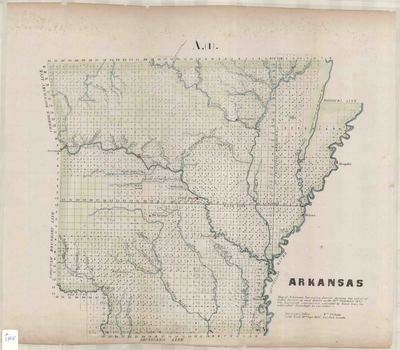