A New Map of Arkansas With its Canals, Roads and Distances

Printed color map of Arkansas with its canals, roads, distances, towns and counties. There is a legend on the side of the map showing steamboat routes. The map was part of Tanner's Universal Atlas.

Henry Schenck Tanner was born in 1786 in New York. He was a cartographer and statistical geographer and owned a publishing company in Philadelphia. He is best known for publishing the New American Atlas. Tanner died in 1858. Arkansas became a territory in 1819 and became a state in 1836.

Clerk's Office of the Eastern District of Pennsylvania 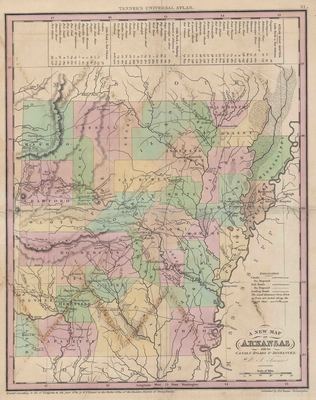