Printed map of Louisiana, Arkansas, Missouri and the Western frontier. The map includes mileage between military posts and depots and the shows the territories of the various Native American tribes.

The 1830s was a tumultuous decade in relations between Native American tribes and the U.S. government. With the passing of the Indian Removal Act of 1830, the Native American tribes of the southeastern United States were forcibly relocated from their native lands to Indian Territory, in eastern sections of modern-day Oklahoma.

Map Illustrating the Plan of the Defenses of the Western and Northwestern Frontier, Map1577, Arkansas State Archives, Little Rock, Arkansas. 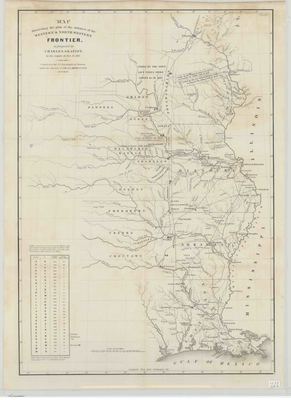