Seismicity Map of the State of Arkansas

This map shows the location and intensity of earthquakes recorded in Arkansas, using the Modified Mercalli Intensity Scale. At the bottom, there is an explanation of the Modified Mercalli Intensity Scale, and on the right side there is an introduction, an explanation of the tables, references and sources, acknowledgements, and a table with all the earthquakes known to have occurred in Arkansas from 1699 to 1977.

Though the western coast of North America is more famous for its earthquakes, part of northeast Arkansas is in the New Madrid Seismic Zone, a seismically active area of the country. The first recorded earthquake in this zone was on December 25, 1699, near what is now Helena in Phillips County. It was recorded by Jesuit missionaries journeying down the Mississippi River, who were startled by a short period of ground shaking at 1:00 pm. The most famous event to occur in the New Madrid Seismic Zone, however, was in 1811-1812, when an intense series of earthquakes struck the area. They remain to this day the strongest earthquakes to hit the continuous United States east of the Rocky Mountains in recorded history.

Though lesser-known, there is another fault line in Arkansas: the Marianna Fault near Marianna in Lee County. It was discovered in January of 2009 by the director of the Arkansas Earthquake Center at the University of Arkansas at Little Rock, Dr. Haydar Al-Shukri. It is still active and is capable of producing earthquakes. 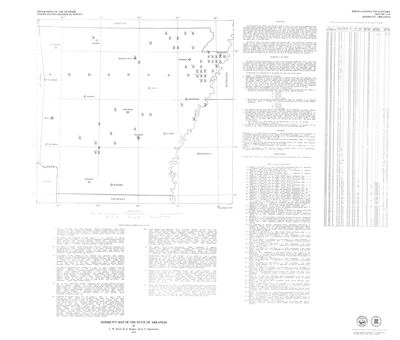