Black and white printed highway and transportation map of Pike County, Arkansas. The map's legend is on the right side. The map shows roads and highways, bridges, railroads, towns and boundaries, cemeteries, farm units and dwellings, businesses, churches, shools, sawmills, mines and quarries. Revisions were made to the map in 1939.

Located in the southwest part of the state, Pike County was established in 1833. Its parent counties were Hempstead and Clark Counties. The county seat is Murfreesboro. seat.

The Arkansas State Highway Commission was created in 1913 by Act 302 during the 39th Arkansas General Assembly. Originally consisting of three members appointed by the Governor, its earliest mission was to supervise and maintain road construction while coordinating with counties and communities. Throughout its first few decades of existence, the Commission faced difficulties with funding, support, and controversy. In the 1940's, the Commission's problems began to even out with the passing of Acts 42 and 239, Amendment 42 and the election of Governor Sid McMath. Membership was increased to 12 members and Commission oversight increased. 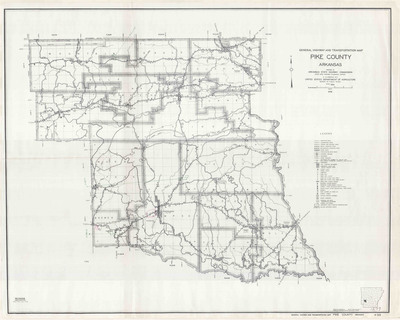