Newspaper article in the September 9, 1829 edition of the Arkansas Gazette discussing river travel between Little Rock and Memphis. The article states that the road conditions between the two cities are so bad that improved river travel would be a good way to promote Little Rock and increase its population.

The Arkansas Gazette, Arkansas's first official newspaper, was established in 1819 by William E. Woodruff, with its first edition printed on November 20 of that year at Arkansas Post. In 1821, Woodruff relocated the Gazette to Little Rock. The newspaper ran until 1991 when it was bought by the Arkansas Democrat. During its run, the newspaper earned two Pulitzer Prizes and was the oldest newspaper published west of the Mississippi River.

Steam Packet between Little Rock and Mem-
phis We know of no improvement which could
tend more to advance the interests of this
Territory, and increase its population, than the
establishment of a regular Packet between this
place and Memphis, Tenn. The great complaint
with emigrants has hitherto been that, when they
get to the borders of our Territory, our roads are
so miserably bad that they cannot proceed farther
without encountering logs and stumps at
every step, or endangering their lives and pro-
perty in wading and swimming through our
swamps, and crossing the numerous water-courses
which intercept their progress to the heart of
the Territory. This complaint, it must be ad-
mitted, is but too well founded, notwithstanding
much has been done toward removing it with-
in the last few years. Few new countries have
better roads at so early a period of their settle-
ment than this. Still, however, much remains
to be done, before they will be in such a state as
to invite emigrants. The situation of the country
in that part of our Territory which borders
on the Mississippi -“ having extensive (and, dur-
ing some periods of the year, impassable)
swamps a few miles in the rear -“ renders it al-
most impossible to construct roads, which can
be travelled more than 6 or 3 months in the
year, without incurring an immense expenditure
of money. This expenditure our infant Terri-
tory is not yet able to bear, and perhaps will not
be for some years to come. We are, however,
indebted to the bounty of the General Govern-
ment, for a tolerable road from this place to
Memphis, which was cut out at the expense of
the United States. This road has been passable
for horsemen and light wagons for considerably
more than a year past, and it is occasionally
travelled by heavy laden carriages, but not
without encountering great difficulty and in-
convenience, in consequence of the extensive
swamps through which it passes beyond White
river, which are generally wet and miry even
in the driest seasons, but in rainy weather become
impassable for heavy carriages. This road is
the one which is usually preferred by persons
emigrating to the Territory from Tennessee,
Alabama, and the other states south and east
of Ohio. But the number of emigrants through
this channel must continue to be small in pro-
portion to the number who are anxious to emi-
grate, until the road is put into better condition
for travelling. As this cannot, under existing
circumstances, be expected for a number of
years, it becomes necessary to select some other
channel by which emigrants can conveniently
travel to the interior of the Territory. None
presents itself with half so good a chance of
success as a Steam Packet, or a line of Steam
Packets, from Memphis to this place. This
would afford a most excellent channel for emi-
grants -“ and it is such a one as must sooner or
later be established. The only question is -“
has the proper time arrived for its establish-
ment? Intelligent persons acquainted with
the trade, and with the expenses of runnin
steam-boats, are of opinion that it has.
We know, from our own observation, that
even the annual visitors to the Hot Springs, who
pass through this place, would defray an impor-
tant item of the expenses; and there can be no
doubt, that if it was generally known that there
was a regular weekly Packet running between
the Mouth of White river and this place, their
number would be increased ten fold in less than
five year. We have no means of forming an
estimate of the number of passengers, and the
quantity of freight, which might be calculated
on at Memphis, but it is evident that it is already
considerable; and it would soon be astonishing-
ly increased by the establishment of a regular
Packet to this place. Add to these items, the
freight which may always be expected at the
Mouth of the White river for the interior of the
Territory, and we have no doubt that the busi-
ness which would be afforded by these sources
would be sufficient to justify the running of a
Packet, or line of Packets, once a week be-
tween this place and Memphis, and make it a
profitable business to the owners. The importance and great necessity of such
a channel of communication with Memphis was
so evident to Gov. Pope, on his arrival here
last summer, that he immediately conceived the
idea of having the mail between this place and
Memphis carried by Steam-boats; and he was
so strongly convinced of the practicability and
utility of the arrangement that he suggested it
to the Postmaster General, and recommended
its adoption. That enlightened officer has
promptly acted on the suggestion of Gov. Pope
and it will be seen by the following letter to the
Postmaster at this place, will receive proposals
for carrying mail by Steam boats on the
proposed route. Its adoption, however, will
depend on the reasonableness of the bids. We
hope that bids will be made by competent per-
sons, and that they may be sufficiently low to
induce their acceptance by the Postmaster General. 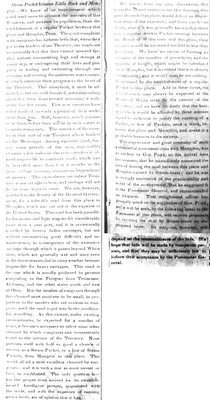