Black and white sketch of Isaac Parker, including biographical narrative.

He put an end to hell on the border

His jurisdiction included large part of Arkansas and the five civilized tribes in Indian Terr.. Because of lawless element in the territory, Judge Parker found it necessary to mete out stern justice...128 criminals were sentenced to death and 88 were executed at Ft. Smith. For many years Judge Parker had the only trial court on earth from which there was no appeal... He died at Ft. Smith Nov. 17, 1896...

"Permit no innocent man to be punished but let no guilty man escape!" 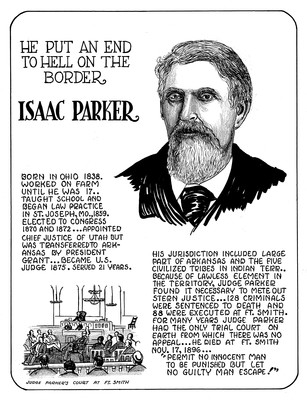