This color postcard depicts a view of downtown Little Rock in the early 20th century. It looks North along Main St. from the junction of Third and Main. The postcard was never mailed.

In 1819, the year Arkansas became a Territory, Little Rock was home to a handful of settlers and just a few crude buildings, including four log "huts" and three larger structures. By the late 1820s, the city consisted of about 400 residents and 60 buildings, only about a fourth of them wood frame or brick; the rest were built of logs. It had a newspaper, the Arkansas Gazette founded in 1819 and the oldest newspaper west of the Mississippi; schools, and churches. In 1826, the first stagecoach line in Arkansas was established between Little Rock and Arkansas Post. In 1836, Arkansas became a state and Little Rock, in turn, the state's capital.
In 1860, 40 years after it was founded, Little Rock's population was just 3,700. In the Reconstruction years following the Civil War, the city grew rapidly - by 1870 the population was at 12,380.
By the end of the 19th century, modern amenities like electric lights, telephones, and a public water system were being introduced, and growth continued, transforming Little Rock from a frontier town to a modern city. At the turn of the 20th century Little Rock had nearly 40,000 residents, more than 170 businesses, six rail lines, streetcars, one seven-story building, a public library with 3,200 books, 75 churches and more than 60 social clubs. Though the Great Depression would slow its progress, the city's population would more than double in the first three decades of the twentieth century. 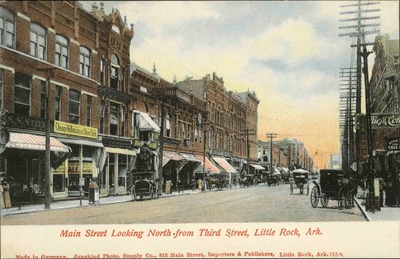