Hoyt informs Edward Colburn that his brother, John Colburn, was killed in the Battle of Seven Pines and requests their mother's address. He continues by stating that he died honorably, and that his family should be proud. Hoyt wishes he would have written sooner had he had the parents address, and asks that Edward give his sympathies to their mother.

John Hoyt, born in 1840, was raised in an educated upper class family from North Carolina. As the Civil War was about to erupt, Hoyt was in Mobile, Alabama, studying to become mercantile worker. He quickly joined the Mobile Guards which were organized into the 3rd Alabama Infantry Regiment. In 1862, Hoyt was elected to Captain of his company. He survived the war, and passed away in 1912.

[Page 1] In Camp 3rd Reg Ala Vols
Near Richmond July 14th 1862
Mr Edward L Colburn
Laurenceville Ga
Dear sir.
Yours of Amd
25th reached me only this morning. hence
the delay in answering. A few days ago
I met one of our surgeons who had been
taken prisoner at the battle of Seven Pines.
He handed me your brothers pocket book
containing some seven dollars in money
and receipts for notes to the amt of
several hunded [sic] dollars. He says that
your brother died the day after the battle
in a yankee hospital _ I could recover
none of his effects as they were all in
his knapsack which fell into the hands
of the enemy. My Company as you heard
did indeed suffer terribly. I lost some
of my best and bravest men, among
them your gallant Bro stands conspicious
for his gallant conduct on that day
In this charge he was ever amongst
the foremost _ and fell fighting nobly
It is indeed a heavy blow to your
mother. Alas there's scarcely a house
in our own happy south _ but what [Page 2] has lost some beloved member in this
cruel war _ May this blow be lightened
by the conviction that he fills no common
grave _ He died for his country and
his mother _ what nobler fate could
be his _ Associated with him as I
have been for the past eighteen months
I had learned to love him as a brother
His many noble qualities had endeared
him to us all - He was a good soldier
and a true gentleman _
I should have written before had
I known the address of his parents _
When this letter reaches you _ Advise me
whether to send his money and pocket
book on by express or not _ where to _
and to whom _ Let me have the
address of his mother _ Present her with
my kindest sympathies _ and
believe me _
Yours Very Respectfully
John K. H Hoyt
Capt Mobile Rifles 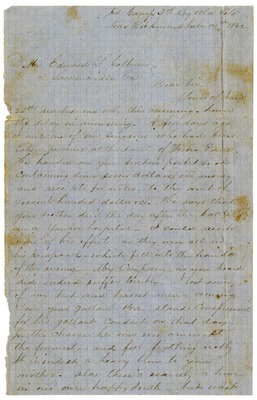