In his letter to his father, Fletcher relates camp news and tells of his steadily-improving health. He expects the regiment to receive marching orders at any time. Fletcher also speaks of other commands, such as Cleburne's, and the direction they are taking. He ends his letter by assuring his family he will have more time to write soon.

[Page 1] Camp Hardee, Pitmans ferry -
Sept 22nd 1861
My Dear Father
I have a fine opportunity this morning
for sending you a letter direct, by Mr Rye, of which
I will avail myself - tho I have not time to write
much - I was much mortified that you were forced
to remain so long at Pocahontas - you could have
ridden home in the same length of time -
Since I have been here my health has improved
amazingly, I have not drilled any up to today except
a drill of officers, but shall begin Monday morning
Everything goes on smoothly - The four commissioned
officers of Co "O" are on most agreable terms, and get along finely
but at meal times, they seperate to their different
quarters - I have very little trouble in preserving the
sanctity of my quarter deck -
My mess consists of Capt Johnson, Capt Crump,
Lieut R. c. Newton and myself - My mess mates
are gentlemen of the highest polish and most
liberal sentiment - I never saw a man in whom
I was so agreably disappointed as in Capt Johnson -
Capt Crump too, is every inch a gentleman - and Newton
is one of the best young lawyers in the state, they say -
Upon the whole I heartily congratulate myself
that the idea seized my subalterns to become exclusives -
I have been very much pressed for time, for
the last four days, being on Court Martial - and
having an immense amount of business for the "Co"
To straighten up - In McCroskey, Hearn [and] Luton were
discharged last Thursday and have gone to "Poca"
on their way home - Brudlove got the Doctor
certificate yesterday, but it has not yet been
approved by the Genl. [Page 2] I feel conscentious in saying that I don't think
he will ever be again fit for a soldier
Old man Smith is here - his object is the
discharge of his son Tom and a furlough for Car-
rol - Tom has had a hard spell of pneumonia
and taking into consideration his tender years, just
15, the fact that he had measles and now
that terrible pneumonia, I think a discharge
exceedingily proper - I am writing out the recom-
mendation anyhow - I am very much pleased
with your idea with regard to the augmentation
of my company by drafts from Hindman's new
recruits - As yet I have said nothing to Col
Bocage about it, but I feel confident that
if anybody can get any such favors I will be
one -
Cleburne's command started for Pt. Pleasant
on last Wednesday, by the Chalk Bluffs road.
We are expecting marching orders any moment
but are in doubt whether we will go by
Bloomfield, the state line road, or by Madison
and Memphis - rumor this morning is decidedly
in favor of the latter - But maybe the
wish is father to the thought -
I have much to say but must defer it till
a more convennient moment - Don't be uneasy
about my health - I eat broiled meats - have
a gridiron - and every once in a while
take a Dudley pill -
My strength is much restored - this bracing
air will make me whole - I weigh 172 -
and am increasing every day - my cough has
disappeared - McCrosky says that being [Page 3] behind the curtain he could hear everything - and
without doubt my return to the company restored
confidence, and gave a healthy tone to the company -
- reminded them that it was really a company -
When I took command camping untensils of
which they stood sadly in need were immediately
forthcoming - and it was this invariable remark
(so McC says) that ," now the Captain is back we
can have our nights"
Really I must close for the want of time -
Give my love to my afflicted mother and Sisters
and Tommy - after today I shall have more
leisure and will write often -
Most sincerly
Elliot H. Fletcher Jr
P.S. Rec'd the towells +c - in good order
E 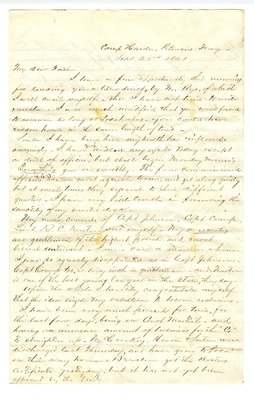