In his letter to Governor Rector, Edmund Burgevin describes difficulty recruiting around Carrollton in Carroll County. Too many men wanted to be captains of their own companies and operate independently instead of joining a larger company where they would not be in charge. Burgevin also complains that few were willing to serve longer than twelve months.

Edmund Burgevin served as Arkansas's Adjutant General before and during the Civil War. He was steadfastly against State Troops being enlisted into Confederate service, wishing Arkansas to retain local control of its own soldiers.

[Page 1] Carrollton, Ark
October 8th, 1861
His Excellency
Henry M. Rector
Governor of Arkansas
President Military Board
Sir,
I have
the honor to report that, up to this date, no company
of volunteers, has yet presented or reported itself to
me.
There seems to be a great apathy and want of
spirit among the people of this portion of the COuntry.
When I first made my appearance among them,
I was a assured that there would be no trouble in
obtaining a regiment under you Excellency's proclama-
-tion and I flattered myself with the hope that the
one from this part of the State would be the first to be
reported organized
One of the greatest difficulties I find to exist
here is that too many men want to be Captains;
men, who having a little local influence, deter
their little squads from connecting themselves with
others. One may control sixteen, another forty
and yet another, ten men, sufficient in the aggre-
-gate to form a company, yet all three pulling
in different directions.
Some complain of being disbanded heretofore and of
bad treatment, others of not being paid. Some say
that they prefer going directly to McCullockh and
enlisting in regiments already in service; they intend
doing so after a while. In fact, I fear there is a
wide spread disinclination to enter the service and
particularly for a longer period than twelve months. [Page 2] The numerous proclamations issued by McCulloch
and addresses by Hindman together with the infamous
course pursued by several execrable newspapers have
in a very great degree been the inducing causes of this
state of feeling.
The various conflicting propositions from the govern-
-ment and from the two officers above mentioned have
to confused the people that they are not prepared
to answer either call.
The demand for men for three years or the war, from
the President, McCulloch and Hindman would have
met with but poor success. The people were decidedly
averse to any engagement of the kind. But the
call made by your Excellency for volunteers for -
twelve months with the six months proviso, would in the
end have been suspended to, but for the last unfortunate
proclamation of Gen McCulloch and the knowledge
that another regiment to be mustered by Col. Frank
Desha would be accepted for twelve months, simply.
Of this latter fact, the people have been advised __
through the columns of the Batesville Balance.
After this, all hopes of obtaining companies under
your proclamation was gone. I was assured that
a general disinclination existed among the people
to undertake for a longer term than one year and
if I did not consent to accept companies for that
period, that all who were anxious and willing to
assist in the war, would inevitably resort to McCull-
-och in companies or squads or disorganized bodies.
In order, therefore, to avoid so unfortunate a procee-
-ding and to prevent the people from going out except
in a manner honorable to themselves and respectable
to their State government, I have been induced to
give my assent to accept companies for twelve [Page 3] months, without the additional proviso of six months further
service.
It is somewhat strange that the Secretary of War just
upon the heels of his requisition upon the Authorities of the
State for volunteers, upon which the proclamation of your
Excellency is based, should have authorized Colonel Desha
to receive a regiment to be raised in Arkansas for simply
twelve months and that General McCulloch well know-
-ing the conditions of the requisition made upon the State
should by his last proclamation announced his consent
to receive these regiments for a less period than that
demanded by your Excellency. It is very certain
that these interferences have tended greatly and to
the manifest injury of the service.
There can be no doubt however that Gen McCulloch
is greatly in need of re-inforcements and that as
speedily as can be obtained. For this reason, and others
heretofore mentioned and in the absence of all instructions,
or any information, I have, as before stated, assumed the
responsibility of accepting the volunteers for just twelve
months. Under this charge, I have strong hopes of
obtaining a respectable regiment within the next two
weeks and I ask the Military Board to confirm
my actions.
I have exerted myself publicly and privately to
infuse some spirit among the people. I have spoken
in public and have had others to do the same, even
from the pulpit. and I now have some assurance of
success. A copy of General McCulloch's last
proclamation with Col Hindman's addendum is here-
-with enclosed.
Respectfuly
Edmund Burgevin [Page 4] Carrollton, Ark.
October 8th 1861
Report of
Edmund Burgevin
2
Military Board 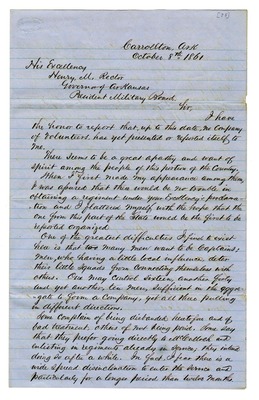