Letter from F.W. Compton in Princeton, Arkansas, to Governor Harris Flanagin. Compton recommends George G. Lea be appointed probate judge. He questions the legality of the Governor making the appointment by pointing to an 1848 state law which states that probate judges, circuit judges and prosecuting attorneys are to be elected by the people. He ends the letter by discussing his concerns over approaching Federal troops and the attempt of the Federal government to organize a new state government in Arkansas. Compton was a Dallas County judge and an Arkansas Supreme Court Justice. George Lea was his brother-in-law.

[Page 1] Princeton 12 March 1864
Governor Flanagin,
Dear Sir:
Yours of the 2nd
just has been received and in reply
I have to say that George G. Lea of this
place is over the age of Conscription
is well qualified to discharge the
duties of Probate Judge, and, I think,
will accept the appointment if tend-
ered him.
But have you the power
under the laws of thes state to fill
the vacancy by appointment? True
the act of 1846 Gould's Dig. Chap 175 Sec 2
title vacancies in office provides that
when a vacancy shall occur in any
office the election to which is by the
people and who is commissioned by
the Governor, the Governor shall fill
the same by appointment, except
[Page 2] where the vacancy shall happen nine
months previous to the next general
election & etc. But, at the passage
of this act, Probate Judges, Circuit
Judges, and Prosecuting Attorneys were
elected by the Legislature and they
continued so to be until the act of
1848 Gould's Dig. Chap 62 Sec 3 title
elections, the election of these officers
was given to the people; and by the
88th section of the last [illegible] act,
the mode of filling vacancies in the
offices of Probate Judge[,] Circuit Judge and
Prosecuting Attorney is by writ of election
saying nothing about filling the
vacancy by appointment under any
circumstances - in other words, the act
of 1848 not only provided for the election
of these officers by the people, but went
further and prescribed the mode of
filling vacancies when they should
occur, and the only mode [illegible]
is by writ of election. See Sec 88 [Page 3] Chap 62 Gould's Dig. The 2nd
section of the act of 1846 could have
no application to these offcers at the
time of the passage of the act, because
they were not then elected by the people
Can it now, when the subsequent
act of 1848 expressly prescribes how
the vacancy shall be filled?
I have thus taken
the liberty to call your attention
to what seems to me to be a ques-
tion. If, however, you should
be of opinion that you can fill
the vacancy by appointment, I
think Wm Lea will accept.
A portion of our cavalry
seems to be gradually moving north
of this place, which makes us feel
a little safer here, though, we all
feel great anxiety as to the [illegible]
campaign. I am endeavoring
to corral(?) provisions and make
arrangments for the support of my
[Page 4] family with a view to protracted
absence from them. I still, however,
cling to the hope that the cavalry
hereabouts will not be again seriously
disturbed by the enemy. Our pros
pects I think are now brighter than
they have been. We may be stripped
of our property but we will never
be subjugated.
You have doubtless heard of
the attempt on the part of the
enemy to organize a state govern-
ment. I should like to see you and
laugh at this.
So soon as I can get
through some necessary arrangements
I will be at Washington. Don't know
now[.] soon I'll be compelled to leave here
& remain away. I know not how long; Con-
sequently I find it difficult to get off.
Make my complements to Judge English
& say, never mind the court. Your friend F.W. Compton 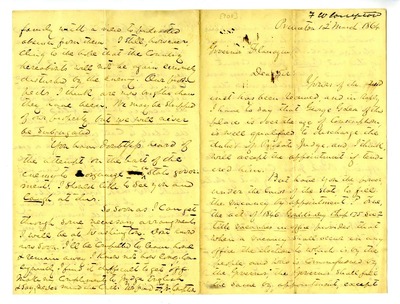