Certificate and written oath for the appointment of David Quertermous to the rank of Captain of the "DeWitt Guard."

[Page 1] Henry M. Rector
Governor of the State of Arkansas
and commander-in-chief of the army of said State, and of the militia thereof,
To all to Whom these Presents shall Come-Greeting:
Know Ye, THAT WHEREAS, David B. Quertermous was elected, on the 7th
day of February, A.D. 1861. Captain of a volunteer Company of Infantry col.
led the "DeWitt Guards" of the Militia of the state of Arkansas, in Arkansas County
I do herby Commission him Captain as aforesaid, in the Militia of the STATE OF
ARKANSAS. He is, therefore, carefully and diligently to discharge the duties of said office, by doing and performing all
manner of things thereunto belonging; and I do strictly charge and require all Officers and Soldiers under his command to be
obedient to his orders, (and which he is enjoined to execute,) as Captain; and he is to
observe and follow such orders and directions, from time to time, as he shall receive from me, or the future Governor of the State of
Arkansas, or the General, or other superior officers set over him. The Commission to continue in force during the time
prescribed by law.
In Testimony Whereof, I have hereunto set my hand, and caused the seal of the State of
Arkansas to be affixed, at the City of Little Rock, this 15th day of February
in the year of our Lord one thousand, eight hundred and sixty-one and
of Independence of the United States the eighty-fifth year.
HM Rector.
By the Governor:
John I. Stirman
Secretary of State,
by O.R. Weaver, Dep. Sec. of State
[Page 2] State of Arkansas
County of Arkansas I David B. Quertermous
do So comnly Live or That I will Support
the Constitution of the United States and
the State of Arkansas and faithfully
discharge the dutes of Captain of the Volun
teer company of Infanty call the DeWitt
Guard of the Militia of the State of Arkansas
in the County of Arkansas to the best of my skill
and ability and that I have not either directly or
indirectly been engaged or in any manner
concerned in any duel or given or been the
bearer of any challenge to fight a duel
in this State since the year 1838
So help me God DB Quertermous
Sworn to and subsented
before me this the 28th day of
Feb. 1861
Joseph H Maxwell Ark.
Resignation of D.B. Quertermous
Captain of volunteer company
DeWitt Guards
Resignation accepted by the
Governor, April 19th
1861 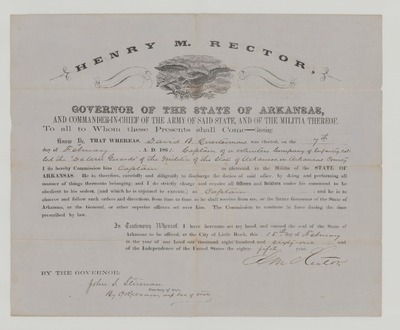