This is an indictment that went before a grand jury to evaluate whether there was evidence that John Riley stole a gray mare.

In June of 1818, John Riley was accused of stealing a gray mare valued at $20. Horse stealing was a serious crime during the 19th century because of a horse's usefulness - they were critical components of farming and transportation. Eli Hillhouse, an educated and wealthy community member, served as the foreman of the Grand Jury in this case. They found no evidence to support the indictment, declaring it "not a true bill," which means John Riley did not have to go to trial.

[Territor]y of Missouri
[Coun]ty of Lawrence
In the Circuit Court for said County of Lawrence of
the July term Year of Christ eighteen hundred eight
-een
(Towit)
The Grand Jurors impaneled[sic] charged and sworn to inquire in and for
the body of theCounty of Lawrence aforesaid upon their oaths present and say
that one John Riley late of said county on the first day
of July year of Christ eighteen hundred eighteen with force and arms at
the township of Ch- - - in the county of Lawrence aforesaid
a certain Gray mare branded O
- - - the value and - - - of twenty dollars of the proper goods and chattles of one
- - - then and there found and being feloniously and willfully did
- - - take and carry away contrary to the form of the statute in such case
- - - and - - - and against the peace and difnity of the United State of
[Ameri]ca and of this territory
John Cook - - -
by Rainy his deputy
[back]
We the jury
find no bill
Eli Hillhouse
Foreman
To July 1818
United State
v.
John Riley
not a true bill 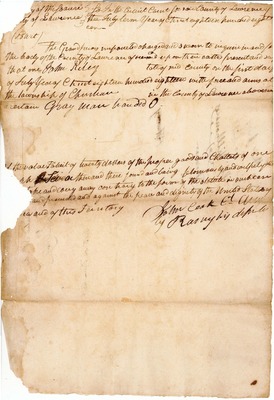