This pamphlet includes the uniform rules and regulations as "prescribed by the secretaries of the Interior, Agriculture, and War to carry out the provisions of the 'Act for the Preservation of American Antiquities'" in 1906.

John Hugh Reynolds (1869-1954) graduated from Hendrix College in Conway, Arkansas. After graduation, Reynolds joined the faculty of the University of Arkansas where he developed an interest in Arkansas history. In 1903 he organized the Arkansas Historical Association, the predecessor to the current association. In 1905, Reynolds drafted legislation to establish a state archives, the Arkansas History Commission, and revised the commission's legislation in 1909. He served as the commission secretary from 1909 to 1911. In 1912, Reynolds was appointed President of Hendrix College, a position he held until 1945. This collection contains correspondence dealing with the early development of the Arkansas History Commission and the hiring of its first director Dallas Tabor Herndon. 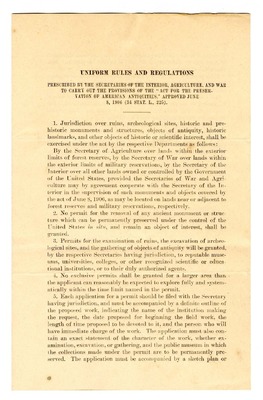