This map shows battle sites, camp sites, and other key points from the Civil War from the years of 1862 to 1864. In addition, it shows the locations of historical markers for the Civil War, with each point of interest being described on the back. The back of the map also features portraits of four Generals involved in the events described, including Confederate Generals McCulloch, Waite, and Van Dorn, and U.S. General Curtis, as well as a picture of a monument to Confederate soldiers, and sheet music for the Confederate song, "The Bonnie Blue Flag."

During the Civil War, Benton County experienced widespread destruction and severe food shortages. It was situated between Unionist and strongly Confederate regions, and subjected to foraging from soldiers of both sides, guerrilla warfare, and outlaws not loyal to either side. It was the site of numerous conflicts and battles, including the Battle of Pea Ridge. Many of Benton Countyâ€™s Unionist citizens fled the hotly contested area, and Bentonville, its most populous city, was one of the first two cities in the U.S. to be burned because of the war (the other city was Fayetteville in Washington County). Even after the war, many of the exiled population did not return. 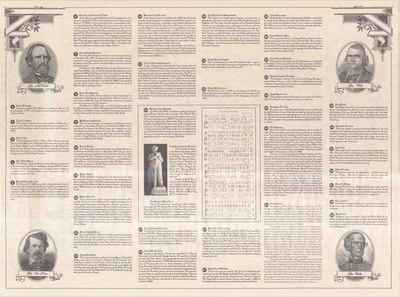