This is a single page of hand-written notes, recounting Lola Dunnavant's experience with the integration of Central High School in Little Rock, Arkansas.

Lola Alice Dunnavant was born October 27, 1900, in Des Arc, Arkansas. She was the daughter of James U. Dunnavant and Helen May Johnson Dunnavant. James U. Dunnavant was born about 1862 and died March 2, 1934. Helen May Johnson was born about 1872 and died in 1947. Lola Dunnavant received her A.B. at Hendrix College in Conway, Arkansas; her B.S. in Library Science at Louisiana State University in 1951, and her Masters in Library Science at the University of Michigan in 1955. She was the school librarian at Little Rock Central High School during the integration crisis of 1957 and wrote an eye-witness account of her experience during that time. She died in February of 1980. 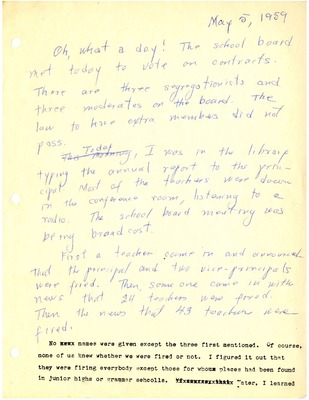