[Page 1] A Jump Ahead or A Jump Behind?
By SAMUEL S. TAYLOR, Associate Editor
A new epoch in equal educational facilities came into ex-
istence when Judge Harry J. Lemley ruled that DeWitt school
district No. 1 must provide facilities "substantially equal" to
those of white children. This decision means as much for future
facilities as the equal salary decision meant for salaries. It has
been pointed out that millions of dollars must be spent on the
Negro schools of the state to meet the implications of this
decision. We take our hats off to Harold Flowers and DeWitt
for their courage.
The Negro situation in DeWitt is not immediately bettered
however, and may not be for a long time.
Here in Little Rock, the decision will also eventually mean
much. A local writer furnishing a by line for her paper states
that during 1947-48, "the Little Rock Public Schools spent
$143.55 per white student and $113.87 for each Negro." This is
an inequality in expenditure. From figures given in the same
by line it may be concluded that the present construction pro-
gram for Negroes to about 16 percent of the total Census fig-
ures show that the population is about 25 per cent of the total.
To put it another way the Negro enrollment is 37 per cent
of the white, but the expenditure on the Negro construction
program is only about 18 per cent of the white.
One only needs to look at the present buildings to note that
they are much inferior taken together to the white buildings.
In the area of high school education, Dunbar on a portion of a
block does the work which five white institutions do on a num-
ber of blocks.
Since the present provision is unequal, and the present ex-
penditures are also unequal, it is evident that the city schools
are a jump behind the courts and not a jump ahead of them.
The present establishment is not up to par and below par
expednitures will make the disparity greater and greater. At
such a rate, it will not be long before some sound thinking Ne-
gro parent refuses to take the counsel of those who eat at Pha-
roah's table, and brings suit for better facilities for his chil-
dren.
The amount of money being spent on the Negro program
looks well but it is disproportionately small, and it is being
spent in a direction of doubtful value. Negro leadership may
not wake up to this until after the building program is over
and its weakness becomes apparant. Then, however, the writer
[Page 2] ventures to predict that there will be growing dissatisfaction.
The direction of spending should be critically revised now to
guarantee its maximum in satisfaction to those whom it is in-
tended to benefit. 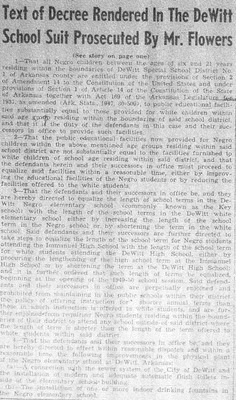