Henry Gaston Bunn was born 1838 in Nash County, North Carolina. In 1844 his parents moved to Tennesse… And in 1849 settled in Ouachita County, Ark… Bunn attened Davidson College, North Carolina… Was admitted to the bar in 1866 and moved to Camden...

In 1861 H.G. Bunn joined company which became part of 4th regiment of Arkansas Confederate troops... Fought in Battle of Elkhorn where he was wounded and captured.. Made his escape and rejoined his command... Lieut. Colonel 1862 at Corinth... Took part in Battles of richmond and Murfreesboro. Wounded at Atlanta and Bentonville... Weighed but 115 pounds and was called the boy colonel of the army... Was a member of state senate and the constitutional convention of 1874..... Elected chief justice of the supreme court 1893... 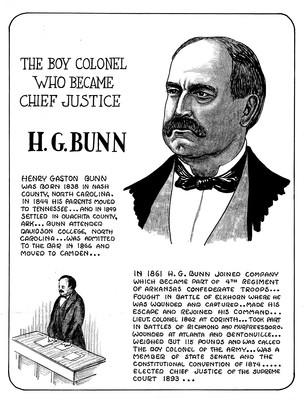