General Reynolds was a native of the Buckeye State having been born 1832 near Centerburg Ohio… Attended Ohio Wesleyan U… Taught school… Read law in Iowa and Tennessee.. Admitted to the bar in Somerville, Tenn., 1858The same year he moved to Arkansas and located at Lake Village.

He entered the Confederate service as captain in the First Arkansas Mounted Rifles, 1861... On March 5, 1864, he was commissioned a brigadier-general and served in the campaigns of Johnston and Hood east of the Mississippi River..

General Reynolds' brigade consisted of 1st and 2nd Rifles; 4th, 9th, 25th and 31st Ark. Infantry and the 4th Ark. Battalion... He lost a leg in Battle of Bentonville Mar. 19, 1865... After the war he resumed his law practice in Chicot County. 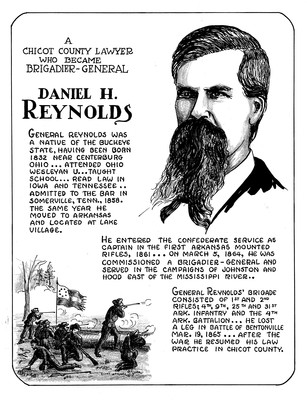