Black and white sketch of H.L. Remmel, including biographical narrative.

Harmon L. Remmel, who spent 51 years of his life in the upbuilding of Arkansas, was born 1852 in Stratford, N.Y… He entered the lumber business in New York City… He became interested in Arkansas' timber resources.. Located at Newport 1876 and moved to Little Rock 1896.

In 1886 he was elected to the state legislature... In 1894, 1896 and 1900 he was Republican candidate for governor.. Delegate to every Republican national convention from 1888 to 1894.. Member notification committee for McKinley, Roosevelt, Taft, Harding and Coolidge... 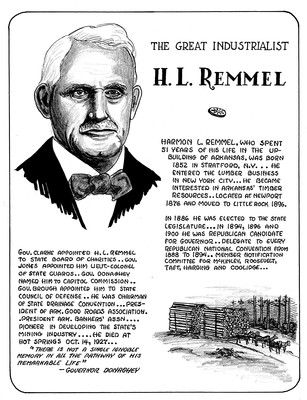