Black and white sketch of Elisha Baxter, including biographical narrative.

Elisha Baxter was born in North Carolina 1827.. Moved to Arkansas in 1852 and entered mercantile business at Batesville.. Three years later the business failed and Baxter learned the printing trade.. Also studied law under H.F. Fairchild, First Chancellor.. Elected mayor of Batesville 1853.. Elected to state legislature 1854 and 1858. He opposed secession and was forced to leave Batesville...

in 1874 Baxter's election to the governorship led to the Brooks - Baxter War.. Baxter's right to the office was upheld and his administration marked the turning point from the evils of reconstruction..

Baxter was offered command of a federal Regt. but declined. He was captured by Confederate troops and indicted for treason but escaped from the jail at Little Rock.. Then enlisted in the Union Army and in command at Batesville until 1864 when he was elected to supreme court.. Elected to the U.S. Senate but not seated.. Died 1899.. 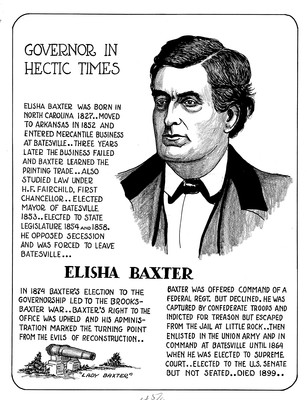