Black and white sketch of George Izard, including biographical narrative.

Born 1777 in England while his father was abroad in the diplomatic service… Graduated from the University of Pennsylvania as an honor man…. Attended the University of Edinburgh and also military schools in France and England.... Was Major-General in war of 1812...

Izard was six feet tall and finely proportioned... He had seven razors named for the days of the week... He was a profound scholar and had a large library including works in Latin, French and Spanish.

In 1825 Izard became governor of Arkansas Territory... Cleared south Arkansas of Indians... Laid plans which eventually removed every Indian from the state... Secured guns and men and organized the militia... In 1827 congress gave Arkansas 72 sections of land for seminary of learning.... Gov. Izard really organized the territory although his predecessors had set up the machinery.... He died Nov. 22, 1828, Aged 51.. 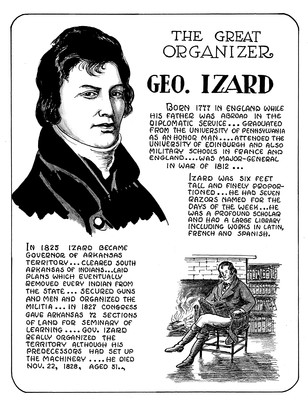