Black and white sketch of S.P. Hughes, including biographical narrative.

Born 1830 in Tennessee.. In 1844 he came to Pulaski County, Ark., and worked on a farm two years.. Then attended Sylvan Academy and Clinton College, Tenn.. In 1849 he moved to Monroe County and worked several years on farm... Elected sheriff of Monroe Co. 1854. Began study of law.. 1857 admitted to the bar.. Began practice in Clarendon.. 1861 enlisted in Confederate Army and rose to Lieut-Colonel. Then joined Morgan's Texas Cavalry and served until close of war.

Hughes was elected to the legislature 1866.. Elected governor 1884 and re-elected 1886.. Elected to supreme court bench 1889 and served until 1896.. During his administration as governor the state won honors at the New Orleans and other expositions.. A geological survey of the state was provided for.. Governor Hughes died on June 29, 1906. 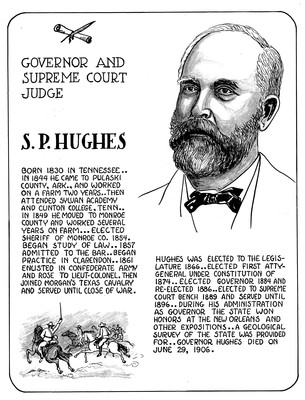