A quarter century on the Supreme Court Bench

Judge Burrell Bunn Battle was born 1838 in Mississippi. His father moved to Lafayette County, Ark… Battle received A.B. Degree from Arkansas College, Fayettevill 1856 and LL.B. from Cumberland University 1858.. Entered law practice at Lewisville. 1861 enlisted in Confederate Army as private in artillery and served until end of war.. In 1869 he moved to Washington, Ark.

Represented Hempstead County in legislature of 1871 and was one of the leaders in opposition to Gov. Clayton.. Practiced law in Little Rock until his election to supreme court 1885.. His service on the bench was continuous until 1911 when he declined to stand for re-election..

"His temper was essential judicial. He deferred a decision until everything that should influence it had been heard 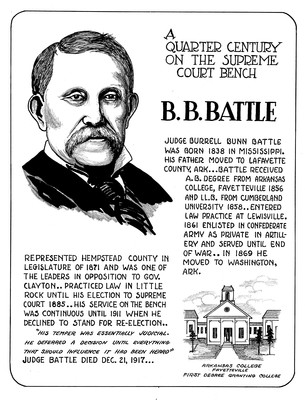