Black and white sketch of Absalom Fowler, including biographical narrative.

Leader of the early bar

This noted pioneer lawyer was born 1802 in Tennessee.. He came to Arkansas at an early date and rapidly made a place for himself through his legal attainments..

Fowler commanded the state troops against the Cherokeee Indians.. He was a member of the constitutional convention of 1836 and was a candidate for governor..

Fowler was a member of the legislature from Pulaski County 1838 and 1844.. He was stricken with paralysis while arguing a case in the federal court at Little Rock, April, 1859 and died June 4.

He was a brillian lawyer and possessed a practical mind.. He was not an orator having a harsh and grating voice and a disposition "but little turned to conciliation."

"He was one of the greatest lawyers Arkansas ever had" - Hallum 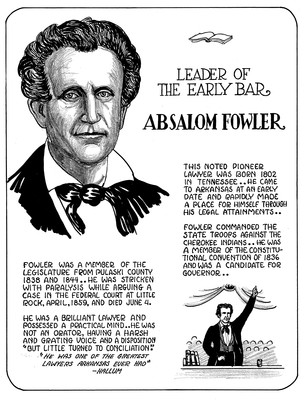