Samuel Wesley Fordyce was born in 1840 in Ohio. Began his railroad career as station agent on Central Ohio RR…Fought in Union Army at Shiloh, Murfreesboro and Chickamauga… He was three times wounded and three times captured.

S.W. Fordyce came to Arkansas in 1876 and settled near Hot Springs. He became a builder and director of many railroads, the greater part of the St. Louis Southwestern Ry. having been built under his management..

He was president of the St. L., Ark. & Texas Ry., The St. Louis Southwestern, and the Kansas City Southern.. He helped build or finance 24,000 miles of railway... He was a friend of Presidents Grant, Hayes, Harrison and McKinley. He was a member of the Democratic National Committee 1884-88 and was a delegate to two natl. Democratic conventions... 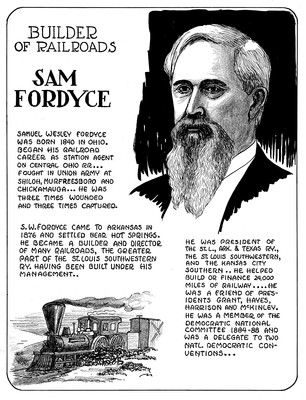