Born 1816 in Alabama. Reared as a farm-boy. Educated in Athens, Ala.. Academy and taught country school… Worked as a silversmith for several years… Studied medicine and read law… Practiced law for five years in Athens, Ala.. And served two terms in Alabama legislature...

Moved to Little Rock 1844 and for nine years was supreme court reporter... Prepared digest of laws 1846...

In 1854 he succeeded Chief Justice Watkins and was re-elected 1860 for a term of eight years.. Disenfranchised under Reconstruction but under new constitution of 1874 was elected chief justice.. Elected a fourth time in 1882...

Judge English was a prominent Mason... Was masonic grand master of the state... Later headed the general grand chapter of the U.S. Died 1884 at Asheville, N.C. 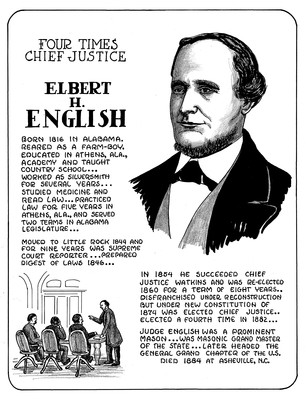