From peddler to governor

Born 1802 in Wilson County, Tennessee… Came into Arkansas as a peddler.. Settled on Ouachita River near Camden and farmed… Was clerk of Clark Co… Moved to Lawrence Co. and represented that county in constitutional convention of 1836...

When Elias N. Conway refused the nomination for governor in 1844, he advised the selection of T.S. Drew of Independence County.... Drew was elected and re-elected 1848... At the end of the first year of his second term his fortune was gone and he was unable to support his family on meagre governor's salary of $1800... Resigned and then returned to farming... He moved to California, joining the gold rush but failed to retrieve his fortunes... Drifted into Texas.... Died at Lampassas, Texas, in 1880.. 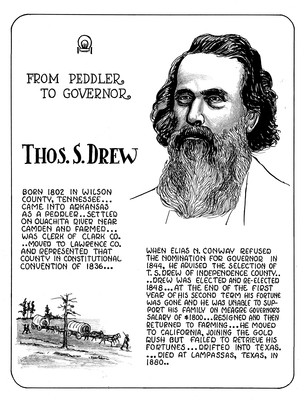