Letter from Sam Ethridge at Camp Pike to his future wife, Nathalia Kauffman, who he calls "Honey Bunch."

Samuel E. Ethridge was the son of John W. and Victoria Ethridge. His wife, Nathalia, was born in 1899 in Alabama. Before the war, Sam worked as a tinner in Little Rock. Nathalia was an exercise teacher in the public schools. They married on April 29, 1920.

Camp Pike, Ark. 9 21-17
Dear friend: -
Arrived at camp OK. but was tired out.
Next morning we were vacinated [sic] and also received a
Typhoid serium [sic] (what ever that is). Have
been feeling kinda sick ever since. A number have
caved in. Some that looked as tho [sic] they could stand
most anything were among those to fall out.
All have shown signs of affection. [sic]
There is quiet [sic] a number of boy [sic] that I know
in the bunch. Harry Kyler, Chas Martin and a
good many more. About 160 or 170 are quartered
in the same barracks.
I do crave a Gazette when we are at leisure.
We are not allowed to leave barracks unless we are
accompanied by an officer. Have been drilling us
a little. Some of the fellows have declared that they
are going to resign Saturday but still if they quit
Uncle Sam will send some one to ask them to come back.
So whats [sic] the use.
We have a few married men in the bunch. They
seem like the others. Dont [sic] seem to be worried
as near as I can determine[.] we will be quarenteened [sic]
14 days. and then there is possibility of not being
able to get away long enough to go to town
I would like to get away long enough to stay all
night. My choice would be to stay in town all the
time. When we can't get what we want we must take
that which we get.
Would appreciate a nice long letter from you very
soon. I just go up enough courage to write and
we don't have very much time to write.
If I just had those [illegible] I have at home I
would do justice to them.
Well [illegible] when you write tell me a lot of things
about the Buick and him.
As we are about to be called to drill I expect I
will cut this short
Write me soon "Bunny Hunch"
Sam E Etheridge
Co No 4 - 346 Infantry
Camp Pike, Ark 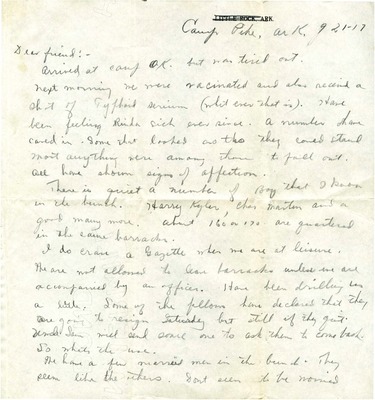