A single-page permanent pass to the headquarters of the 87th Division, Camp Pike, Arkansas, issued on April 4, 1918 to Governor Charles H. Brough. The pass is signed by W.H. Dukes, Adjutant General, Acting Division Adjutant. In the lower right corner there is a notation written in pencil that appears to read "O.K. G.G.R." The pass is from the Charles H. Brough Collection. Charles Hillman Brough (1876-1935) was governor of Arkansas from 1917-1921. 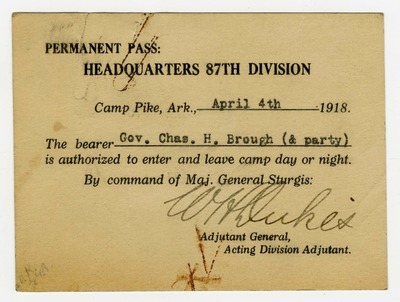