Photograph of Third Arkansas Infantry company under the command of Oscar B. Robbins, who is standing in the center of the front row. Handwritten inscription on back reads: "O.B.'s writing, My Company Mama, Which I am the Commander, Keep this I only have one, 1st Lt. Oscar B. Robbins (standing center front row), 3rd Ark. Infantry 1918, His mother"; “Mrs. J. W. R., Rosebud, Camp Pike, Little Rock, Ark."

Camp Pike, known as Camp Joseph T. Robinson since 1937, is located in present day North Little Rock, Arkansas. Named in honor of Brigadier General Zebulon M. Pike, Camp Pike served as a home and training camp for the 87th Division (National Army) and then as a replacement training facility after the division deployed to France during World War I. Construction totaling about $13,000,000 on the camp began in June 1917 and was substantially complete by November 1917. The post was a demobilization station and home for the U.S. Third Infantry Division as World War I came to an end. Between World War I and World War II, the camp served as the headquarters of the Arkansas National Guard. During World War II, Camp Robinson became a replacement training center, primarily for basic training and medics, and a German prisoner of war facility. As of 2014, Camp Joseph T. Robinson serves as a 33,000-acre training facility for the Army National Guard and is the headquarters for the Arkansas National Guard.
Oscar B. Robbins was born in Rose Bud (White County), Arkansas, in 1886. He married Minnie Lee Jones of Mt. Vernon (Faulkner County) on Christmas day, 1917, at the Marion Hotel in Little Rock. The couple had no children. Robbins graduated from Ouachita College in Arkadelphia, where he had participated in football and track. He was principal at schools in Rose Bud and Floyd, and helped organize Woodmen of the World insurance benefits for Arkansas. He served in the 3rd Arkansas infantry and the 141st Anti-Aircraft Machine Gun Battalion during World War I. He was also a representative in the Arkansas legislature prior to his service in World War I. Robbins began his successful business career by purchasing a Ford dealership in Heber Springs in 1919. Among his other professional endeavors he was president of the Cleburne County Bank. Oscar Robbins died July 23, 1946, and is buried in the Robbins family plot in the Heber Springs Cemetery. 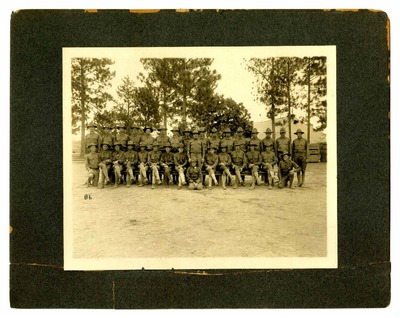