Postcard titled "Camp Pike Camp Pike. Little Rock." shows a building under construction at Camp Pike, Pulaski County, Arkansas, ca. 1917. In the image workers place beams along a roof line, place siding on buildings, construct a water tower, and carry material by horse drawn wagons. There is no indication of the photographer or producer of the postcard on the front or back. Printing on the back of the postcard reads: "Post Card Place Stamp Here ANO Correspondence Here Name Here" 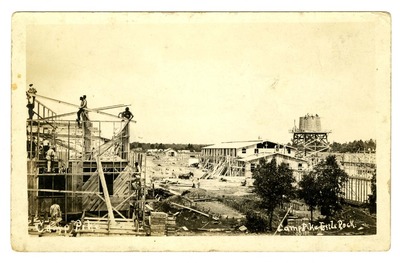