Letter from W.W. Mansfield to his son, Walter

This is a letter from William W. Mansfield to his son, Walter, written while Mansfield was staying in Little Rock, compiling the laws and statutes of the state of Arkansas that had been passed in 1883. The work, usually referred to as Mansfield's Digest, was published in 1884. In this letter, W.W. Mansfield tells his son about a new invention called the telephone, and says how he wishes the family had one in their home so he could call and talk to his children. He misses his family very much and wishes he were home so he could go fishing with Walter.

William W. Mansfield was born in 1830 at Scottsville, Kentucky. He studied law, and at the age of 22 settled at Ozark, Franklin County, Arkansas. He married Sallie Henderson Shores of Franklin County, and had seven children: George W., John H., Mary Amanda, Walter N., Asher Caruth, W. W. Mansfield Jr., and Sallie Adelaide. Mansfield served as justice of the peace as well as a school teacher. He was representative from Franklin County in the General Assembly of 1859, a delegate to the secession convention of 1861, a member of the constitutional convention of 1874, and during the first election held under the new constitution, was elected judge of the Fifth Judicial Circuit. At the close of his term, he returned to practicing law. In 1882, he ran for congress but was defeated, and in 1883, Mansfield was appointed by Governor Berry to compile a digest of the statutes of the state. The work was published in 1884, and is usually referred to as "Mansfield's Digest." He was reporter for the Arkansas Supreme Court from 1887 until 1890, and in 1891 was appointed associate justice of the Arkansas Supreme Court, a position in which he served until 1894. William W. Mansfield died in July, 1912.

Little Rock Sunday Night
Ark.
April 27, 1884
Dear Walter:
It is just night and raining. They have things here
they call telephones by which people can talk at one place
with other people a long ways off. The sound of the voice goes
along a wire and the person who is talked to, understands the
words and answers back and thus two people stand, one
here and one at Hot Springs, and talk to one another as
long as they please. I wish there was one to Ozark and
up at our house. I would ask if there "is much of a
storm there; and I would say "are you well Walter, and have
you been a good boy to day?" and here would come your little
voice all the way back and telling all about home - and presently
I would say "is Asher there"? and maybe I would here you say
"yes" - and then I would say let Asher listen on the wire -
and then I would say "Asher how much do you love Pa" - and then
I'd hear a little voice tumble all along the wire "a whole
house full." That is a strange way to talk - get your Ma to
explain it.
Well, if I had my two little boys here I would not be
so lonely as I am to night. I begin to want to see them so
bad and to wonder when I will see them. I go by one store
here where they have lots of fishing poles to sell - At another
store I see a picture of a whole string of beautiful fish, hang-
ing in the window. At another store are all kings of lines
and hooks and corks - some pretty little painted corks and
pretty little lines - would about suit you and Asher, and then may-
be, I meet a man who has been to the market and bought a
string of perch, and maybe it's a bright sunny morning
and I hear some martins warbling up under the eaves of
a high house - and then I say to myself "Spring has come again" -
yes; our Heavenly Father has sent us the warm sunshine
and the singing birds and the flowers again. Yes,and this is April
now is the time to have good fishing - Oh if I could only be
at home now. I'd take Walter and Asher with me a fishing- I
know I could catch one big trout - But I get back to my
room and sign as I begin my weary Task again. Don't
you and Asher and your ma never talk about coming
to see me? I am very lonely and sad down here sometimes -
I see a great many pretty thigs here in the stores - pretty
Toys and pretty books and pretty pictures and nice
things to eat. When my work is done and I get pay for it,
I will buy you and Asher and Adelaide lots of them
and take home with me. Good n ight dear Walter
and give my love to Asher and the rest.
Your affectionate Pa
W.W.M.

Whenever I am asked if we ever come across interesting and unique materials in our collections, this letter is the first item to spring to mind. William W. Mansfield is a known figure in Arkansas history, who served in many different public positions through his life. This letter, however, shows the man behind the judge, who is kept in the city by work but really wants to be home with his family, hearing his children's voices and taking them fishing. He tells his son of the wonderful new inventions they have in Little Rock -“ the telephone --“ and wishes they could have one in their house on Ozark, so he could call, and maybe then he wouldn't feel so homesick." - Mary Dunn 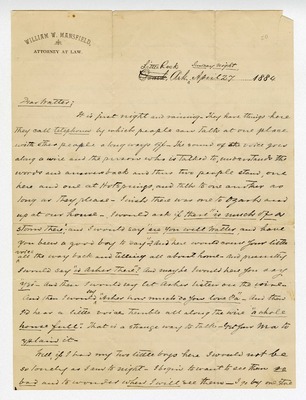