Omer Weaver owned this extremely rare Arkansas State Militia belt plate. The Arkansas State Militia belt plate was used by several Arkansas troops at the being of the Civil War. Less than half a dozen of these belt plates are known to exist today. The belt plate has the seal of the state of Arkansas cast on it. The Arkansas buckle was made of a thin brass stamping, to which puppy foot style hooks were attached for fixing the plate to a belt, and the brass stamping was then filled with lead.

Omer Rose Weaver (1837-1861) was one of the first Arkansans killed during the Civil War in battles west of the Mississippi. He died at the age of 24 at the Battle of Wilson's Creek in Missouri on August 10, 1861. Omer Rose Weaver was born to Samuel Montgomery, Sr., and Mary Eliza Rose on February 15, 1837, in Arkansas. He spent most of his youth in Little Rock, until he enrolled in the Western Military Institute in Kentucky in 1852. After returning to Little Rock, Omer Weaver conducted land surveys for Governor Henry Rector and worked under his father, Samuel Weaver, who was Secretary of State in 1860. He socialized with the elite in Little Rock. Weaver helped organize a troop of Little Rock youth with William E. Woodruff, Jr., called Woodruff's Battery, Pulaski Light Artillery, in which he served. The battery was also known as the 3rd Arkansas Field Battery, the Totten Light Artillery, the Weaver Light Artillery, and Marshall's Battery.

Omer Weaver has always intrigued me. The Arkansas State Archives has a large collection of material owned by Omer Weaver, such as clothing, military items, correspondence, calling cards, and photographs. Looking at all the items, you get an idea of what this young man's life was like before the war, when he attended Little Rock soires in his costly vest with a dice patterned tie and one of Albert Pike's daughters by his side. He playfully posed for a photograph with friends pretending to be asleep while someone tickled them with a feather. Omer Weaver was wearing this belt plate when he died in the Battle of Wilson's Creek. Many people prize this belt plate for its extreme rarity, but to me it is also a reminder of the young lives that are lost during war and their potential life that was never completed. -Julienne Crawford 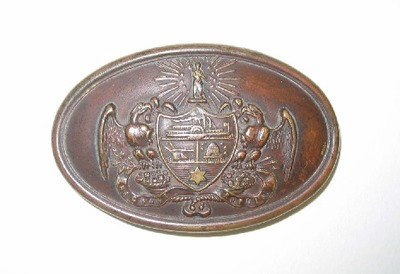