Edward Payson Washbourne (1831-1860), an Arkansas antebellum artist, painted this self-portrait. Washbourne is best known for his painting, The Arkansas Traveler, which depicts an encounter between a wealthy traveler and a family of squatters in Arkansas. The Arkansas Traveler painting became a popular print and was widely distributed as a Currier and Ives lithograph.

Edward Washbourne was the son of Cephas Washburn (1793-1860), a Christian missionary and educator who worked with the Cherokee of northwest Arkansas and eastern Oklahoma. Edward Washburn was born on November 16, 1831, at Dwight Mission, then located in Indian Territory (present-day Oklahoma). Edward and several of his brothers adopted using the old English spelling of their last name â€œWashbourne.â€ After the family moved to Fort Smith in 1851, Edward received his first formal art training. In 1853, he moved to New York City and studied under Charles Loring Elliott. By 1855, he had returned to Arkansas and soon established studios in Fayetteville, Little Rock, Fort Smith, and Washington, Arkansas. Washbourne was widely sought for portraiture. A business card for the artist from in the Washburn Collection at the Arkansas State Archives reads"E. P. Washbourne, Portrait Painter, Washington, Ark. Room on the Third Floor of the Odd Fellow's Hall." Washbourne died suddenly from an illness in Little Rock on March 26, 1860, only 9 days after the death of his father in Little Rock.

I have always loved this painting since I first saw it. The painting is gorgeous and shows Edward Payson Washbourne's great skill as an artist. It is interesting to view how an artist sees himself. The Arkansas State Archives has several of his other paintings as well as personal letters he wrote to his family members. I often wonder if Edward Payson Washbourne had lived a longer life, if he would have become better known nationally and internationally. - Julienne Crawford 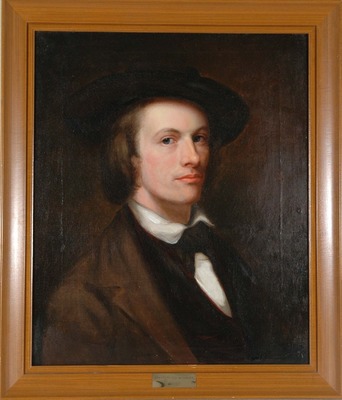