Front and back cover of Sing Out! Magazine. The fold out is black and white and shows members of the Rackensack Musical group at a traditional mountain and folk music meeting in Timbo, Stone County (Ark.) in 1966.

The Ozark Folk Festival in Mountain View, Arkansas, was only officially 4 years old when this photo was taken by Jimmy Driftwood in Timbo. By the early 1970s, the Ozark Folk Center would be open, and thousands of people would visit the folk festival with crafts and music attractions at the courthouse square and along the main street of Mountain View, as well as events at the Folk Center. However, in 1966, it was more focused on local musicians and craftspeople gathering around the Stone County courthouse in Timbo, Arkansas.

I knew a Southern Baptist minister in the late 1960s and early 1970s who came from Timbo, Arkansas. He later became a principal at the Mountain View school. Once, in 1973 or 1974, he took our family up to Mountain View to see the new Folk Center. He knew every house in the county from the Harrison highway to Batesville. It would not surprise me if he werenâ€™t in this picture somewhere. The photo also reminds me that all the music festivals and state parks in Stone County began with local people playing music on their porches and later at the courthouse square. That's the definition of "folk" music to me. - Jeff Lewellen 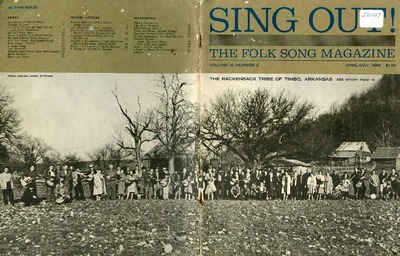