Little Rock, Sept. 26th 1825.
The Honble
The Secy at War.
Sir.
I have the honour to
inform you that the Quapaw
Indians will be ready to commence
their removal to the Cadeau [sic]
Country on the 12th of December.
The proposals for their supplies
will be published in the next
Arkansas Gazette. I have been
unable
unable [sic] to obtain specie for the Treasury
notes in my possession, and shall be
obliged to send a confidential person
to New Orleans for that purpose.
With respect to the money appro-
-priated for the migration about
to take place, it will be desirable
that it should be received as early
as practicable. If there is no objection
to sending future remittances
in checks of $500, the measure
would facilitate the transaction
of our pecuniary affairs in this
remote district.
I beg leave to recommend the
appointment of Mr. Bernard Smith,
formerly of the House of Representatives
from N. Jersey, and now Register
of the Land Office at this place
for a vacant sub agency here. This
present office, which was expected
to be lucrative, barley furnishes
the means for the support of his
family. He bears a very fair cha-
-racter, and held some years ago
a confidential situation in the Dept
of State, after having been Private
Secy to President Jefferson.
I am & c
To the Members of the Legislative Council & of the House of
Representatives composing the General Assembly of the Territory
of Arkansas.
Fellow Citizens,
The Act relative to the Organization of our Superior Court
passed at the Last Session of Congress, and the Treaty with the
Cherokee Indians, ratified on the 28th of May, by which they ceded
the Lands now and Lately in their possession within this Territory,
and receive in Exchange a large Tract of Country West of our
Late Boundary, as well as a considerable Portion of the Country
laid off at your last Session under the name of Lovely,
rendered it indispensable that you should be summoned
to an Extra-Session. The Western Boundary of our Territory
is by the above mentioned Treaty so altered as to leave
the Choctaw & Cherokee Settlements entirely out of our
Limits. It is probable that in a few months the White Popu-
-lation now in Lovely County will, under the Liberal Pro-
-vision made for their Indemnification, have removed into
the newly acquired District, and it has Therefore become
necessary to organize the Latter in the Manner hitherto
pursued by the constituted authorities. A new arrange-
-ment of the circuits is also called for by the existing
State of Things. To these two important Subjects I invite
Your prompt & earnest attention.
Ark. Territy; Little Rock. October 7th, 1828
Geo. Izard

I found this while going through the small manuscripts. The collection consists of two letter books containing correspondence between the office of Arkansas Territorial Governor George Izard and the Department of War. I picked a letter written by George Izard to the War Department in which he gave a little census of the Quapaws in the margin. The message to the Arkansas Territory General Assembly was written shortly before his death. - Amanda Paige 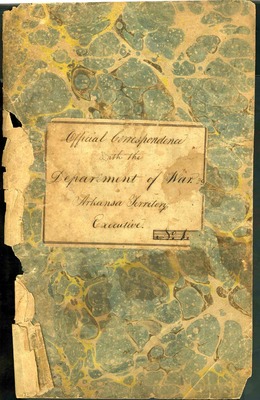