An early example of a simple marriage license form customized for the minister who filled in the date, names and ages of the groom and bride and signed his name. The use of forms emerged after the Civil War. Licenses prior to the Civil War were usually just handwritten slips of paper submitted to the County Clerk for filing. Some of the earliest forms in Hempstead County were used for the marriages of the recently emancipated former slaves. This change emerged in the late 1860s. In the early years after the end of slavery marriage licenses for African-Americans were filed in a separate marriage book as the license indicates.

The form was specifically prepared for Richard Samuels, a black minister of the Methodist Church, who came out of slavery in Washington, Arkansas. He had been a blacksmith in slavery and was enslaved to Dr. Benjamin P. Jett of Washington. Samuels later served as county clerk and as a member of the Arkansas Legislature during Reconstruction. In 1874, he was one of three ministers from Arkansas who traveled to Jackson, Tennessee, and with a total of 41 black Methodist ministers founded the Colored Methodist Episcopal (CME) denomination, now known as Christian Methodist Episcopal. He also founded St. Paul's CME Church in Washington in 1867. It is still an active church. - Peggy Lloyd 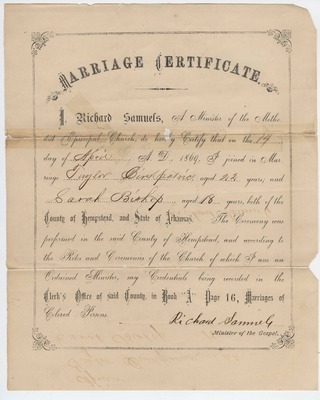