This is a black and white postcard showing a group of men harvesting peaches from an orchard at Siloam Springs, in Benton County, Arkansas. Some of the men are in a car, others are standing, while others are up on ladders next to the trees. Baskets of peaches are shown in the foreground.

In the mid-1800s, what would become the town of Siloam Springs was known as "Hico," a Cherokee word meaning "clear water" or "sparkling water." Hico's post office was established in 1855. In 1880, Hico merchant and former Union scout John Valentine Hargrove established Siloam City on land he owned in the valley along Sager Creek. Several factors led him to do this. The St. Louis'“San Francisco Railway (Frisco) in eastern Benton County led residents on the west side of the county to think that they, too, would soon have a railroad. The pure spring water flowing into Sager Creek was said to be medicinal, and testimonials about cures attracted health seekers even before Hargrove platted his land into a town. Trade with the Cherokee Nation and farming continued to be important parts of the local economy.
Promotion of the new town was so successful that it was incorporated in the next year as Siloam Springs. In 1882, the Hico post office closed, and the Siloam Springs post office opened. When there was still no prospect for a rail line by the mid-1880s, many of those who made up the town's initial population boom began to leave.
But in 1893, the Kansas City, Pittsburg & Gulf Railroad began building towards Sulphur Springs; this line was reorganized as the Kansas City Southern in 1900. To ensure that the line would pass through town, local businessmen led by Robert S. Morris of the Bank of Siloam pledged $20,000 to the railroad, half when the first passenger train arrived and the rest six months later. They also secured land for the depot and ten miles of right of way for the track. On December 20, 1893, the railroad reached Siloam Springs; most of the buildings in the downtown historic district were built between this date and the beginning of the Great Depression.
By 1900, Siloam Springs was a summer health resort with city-owned water and electric services, public schools, and a telephone company. The apple industry was thriving, and peaches, strawberries, and other fruit crops were also grown commercially. 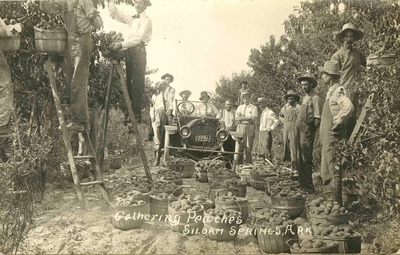