This is a black and white postcard, published by the Souvenir Post Card Company of New York, with an image of Fifth Avenue in Pine Bluff, Arkansas, on the front. It was sent on October 8th, 1907, to Sallie Walker.

The city of Pine Bluff was founded by Europeans on a high bank of the Arkansas River heavily forested with tall pine trees. The high ground furnished settlers a safe haven from annual flooding. Joseph Bonne, a fur trader and trapper of French and Quapaw ancestry, settled on this bluff in 1819. After the Quapaws signed a treaty with the United States in 1824 relinquishing their title to all the lands which they claimed in Arkansas, many other American settlers began to join Bonne on the bluff. In 1829 Thomas Phillips claimed a half section of land where Pine Bluff is located. Jefferson County was established by the Territorial Legislature, November 2, 1829 and began functioning as a county April 19, 1830. At the August 13, 1832 county election, the pine bluff was chosen as the county seat. The Quorum Court voted to name the village "Pine Bluff Town" on October 16, 1832. Pine Bluff was incorporated January 8, 1839, by the order of County Judge Taylor. At the time, the village had about 50 residents. The Arkansas River's proximity to Pine Bluff allowed the small town to serve as a port for travel and shipping. Throughout the 19th century, steamships provided the primary mode of transport from areas as far away as New Orleans. The Arkansas River was a constant threat to the town in the early 20th century, eating away land and, in 1908, lying fewer than 100 yards from the courthouse. 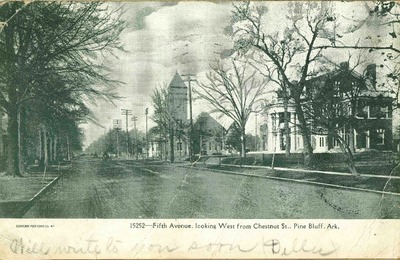