Thomas C. McRae served as a member of the U.S. House of Representatives for 18 years and served as the 26th Governor of Arkansas from 1921-1925.

July 20, 1928
Dear Paul:
On my return late this morning
from a school picnic at Gale[,] I got a copy
of the proposed advertisement as to the high
character and efficient work of Justin Mathews
and as soon as I read it, I put in a call
for you at the Headquarters of Parnell
and failing to get you[,] I talked to Mr.
Cambell and authorized him to sign my
name to the document. His friends and
the friends of the present [illegible] program
owe it to him to defend him against
inquest attacks in his efficient and
impartial administration of the law.
You must not however let this cam
paign be given such a turn as to local-
ize it in Pulaski County. Which in
that county he has always given it
good custodian at a fair cost. The
people in the other counties like Nevada
and other fundless and roadless counties
are not concerned as to whether the
districts in he [Mathews] was interested should have
been created or not or whether the Pulaski
County Judge could have made better use
of the money in some other part of
the county. It should however be
made clear if it is true that the
debts of all of the districts in Pulaski
County including those in which Mathews
may have had a direct or indirect intent
have been charged to and paid out of the
Pulaski apportionment. The questions
of whether the roads in the various
districts and other various counties should have been considered
or whether they are worth cost or
not for the commission to determine
but they should all be charged to
the county in which they are located
and if that is true in Pulaski then
the other counties are not intrusted
in the fight of the Mayor of Little Rock
and the county judge of Pulaski against
Mathews. The people of the small
counties want protection against
counties like Pulaski and they are
for Mathews because they believe
he is giving them that protection.
I have written you learnedly(?) but
trust I have made myself understood
and that the idea I have [illegible]
to bring out will not be overlooked.
Your friend
Thomas C. McRae 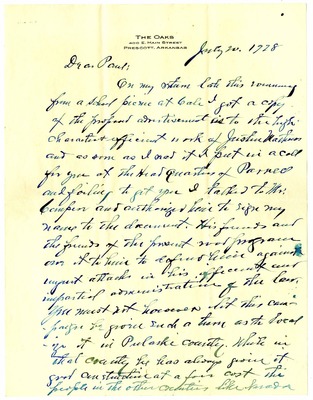