Two letters written to Chester Ashley. The first letter is from his son, William Eliot Ashley notifying his father that he'd won his election. The second letter is from Arkansas Governor Thomas S. Drew verifying votes received by each candidate and instructing Ashley that he is to cast a vote on the first Wednesday of December.

Little Rock Nov 1844
Dear Pa
I enclose a letter from Gov Drew
notifying you of your election to the office of
Elector for President and Vice-President of the W.(?)
Also a list of names handed to me by Mr Mit-
chell of Randolph County - Euclid Johnson is
log-rolling with the Legislature for the office of
Elector - The sheriff of Jefferson County called
on me for costs due him in the Nicoli suit
I referred him to Mr Bebee who said that he
had nothing to do with the matter -. As the
sheriff stated that the things were worth much
more than the cost amounted to, by the advice
of Mr Woodruff I paid the cost and directed
the things to be sent up -
The Sheriff of Lafayette County called on me
for taxes on some lands of yours situated in
his county which he said you had paid
taxes on regularly - Mr Woodruff told me that
you had left money with him to pay other
taxes but had made no mention of this
tract or tracts - I accordingly paid the amt
and will (in the morning) get a description of
the lands and send it to you with a receipt for
the amount paid by me -
On Thursday evening we are to have a grand
Democratic Ball in honor of James K. Polks[sic]
election[.] It is to be given at the Anthony house
and is to be a very splendid affair - Ma is
writing and will give you all the news.
Your son
W.E. Ashley
P.S. I think that you need not make any
arrangements for Fan as aunt[sic] Laura is as
yet undecided
W.E. Ashley Executive Department
Little Rock
November 25th 1844
Williamson S. Oldham
Mark W. Izard and
Chester Ashley
Gentlemen
In con-
formity with the second election under
the head of electors, in the (?) statutes
of this state, I proceeded to count and
compare the vote polled on the first
Monday in November 1844, for candi-
date for electors for President and Vice-
President of the United States; whereupon
it appears that Williamson S Oldham
has nine thousand five hundred and forty
six votes (9,546 votes)
Mark W. Izard had nine thousand five
hundred and forty four votes (9,544 votes)
Chester Ashley had nine thousand five
hundred and forty six votes (9,546 votes)
and that
John Cocke had five thousand five
hundred and four votes (5,504 votes)
William Byers had five thousand
five hundred and four votes (5,504 votes) John Drennen had four thousand three
hundred and sixty two votes (4,362 votes). Alfred W. Arrington had one thousand
one hundred and ninety three votes (1,193 votes)
Wherefor it appears that William-
son S. Oldham, Mark W. Izard and
Chester Ashley are duly elected Electors
for President and Vice President, for the the
State of Arkansas
In testimony whereof I
set my name of Governor
of the State of Arkansas
and cause the great seal
of the State to be affixed
Done at Little Rock the
25th day of November
(A.D. 1844) in the year
of our Lord one thousand
eight hundred and forty
[inserted above the next line] independence of the
four and of the United
States the 68th.
Tho. S. Drew
Little Rock
Nov. 21st 1844
Col. Chester Ashley
Sir,
You will perceive from
the within list that you are Elected One of the
Presidential Electors for President and Vice President
for the State of Arkansas and will be required
by law to cast your vote on the first Wednesday
in December next (4th day}[sic]
Very respectfully
Yrs
Tho. S. Drew 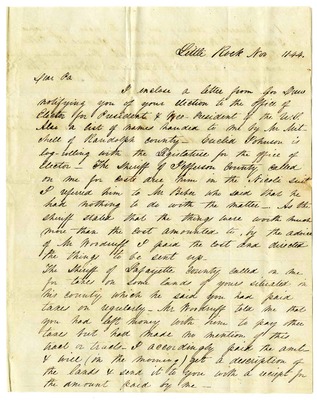