Photographic negative taken of the Joseph Booker family of Little Rock, Pulaski County, Arkansas from the book, "How I Succeeded In My Business," by the Reverend A. H. Miller, published in 1911. Included in the photograph are (back row, left to right): Helen M., Carrie J., Jos. Robert, Mattie A. and William A.; and front row: President Jos. A., Baby James H., Mrs. Mary C., Walter M. and Sarah A.

Joseph Albert Booker was born on December 26, 1859, in Old Portland, Ashley County, Arkansas. He was born a slave to Albert and Mary Booker on the Bayou Bartholomew plantation owned by John Fisher. Mary died soon after Joseph's birth and his father was whipped to death when Joseph was three. He was charged with urging a slave revolt by teaching other slaves to read. Joseph was raised by his grandmother, Emma Fisher, after the end of the Civil War. She encouraged him to go to school and he became a teacher by the age of 16 or 17 in Ashley County. He later became a licensed Baptist minister and attended college in Pine Bluff at the Arkansas Agricultural, Mechanical, and Normal College and then Roger Williams University in Tennessee. In 1887, Booker became the first president of Arkansas Baptist College in Little Rock, to which he was president till his death in 1926.

Persistence of the Spirit collection, PS.44.23 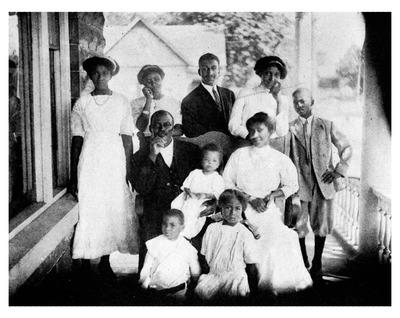 Persistence of the Spirit collection