Spanish Mines and Treasures in Arkansas

This is a compilation of letters asking for information about the mythological hidden Spanish treasures in Arkansas. Judge R.H. Borrow of Ozark wrote to ask his United States Representative from Arkansas's 4th Congressional District, Otis Wingo, to give him any information on the Spanish treasures in Arkansas. Wingo refers him to the state geologist, George Banner. In the next set of letters, Banner explains to A.L. Pierce that the assumed mines of the Spanish are actuality naturally occurring spring beds.

Stories of Spanish treasures and gold mines have been apart of Arkansas's mythology since just after Hernando De Soto's death in 1542. Many believe that the Spanish found sliver mines that the Native American tribes had used. Some stories say that the Spanish found them and mined them for many years but before leaving for Mexico, destroyed the entrances. Tales of hidden mines are still active today and there are many websites and books dedicated to the idea of finding the lost treasures of the Spanish. 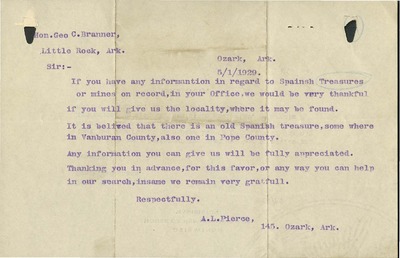