This image is of the seventy fifth anniversary dance and dinner celebrating the founding of Congregation B'nai Israel.

The Congregation B'nai Israel was originally named 'The Little Rock Congregation' before it was officially formed on November 11, 1866, at which time the name changed to B'nai Israel (Sons or Children of Israel). Meetings where held in the Ditter Building at Main and Water streets with ninety charter members, and 214 families and pioneer members or individual persons. This image is of the congregation at B'nai Israel celebrating its seventy-fifth year in Little Rock, Arkansas. The celebration lasted two days, from November 27th and 28th in 1941. The guest speaker was Rabbi Ferdinand Isserman from the Temple Israel in St. Louis. 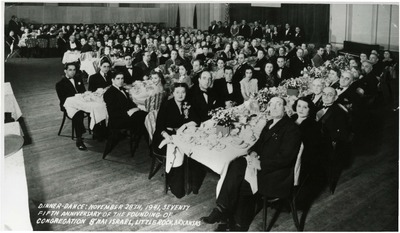