John Byers, resident of Huntington Beach, California, had written to Governor Adkins to inform him that Japanese immigrants, or Issei, had discovered a way to own land in California, despite California's laws against non-citizen ownership. In this letter, Governor Adkins' secretary Joe Martin writes back to Mr. Byers thanking him for the interest he showed in the Alien Land Act passed by Arkansas's State Legislature and saying that the act prohibits any Japanese, citizen or alien, from purchasing or owning land in Arkansas. 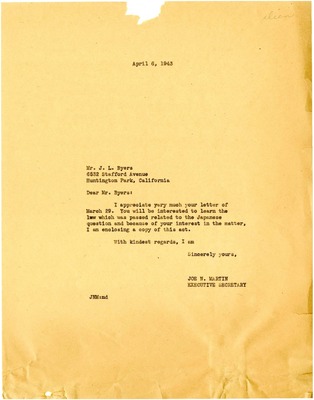