This is a letter from Private Winston Laughlin in Virginia to Governor Homer Adkins protesting the internment of Japanese Americans.

After the bombing of Pearl Harbor on December 7, 1941, President Franklin D. Roosevelt signed Executive Order 9022, creating the War Relocation Authority (WRA). The WRA selected ten sites in which to imprison more than 110,000 persons of Japanese ancestry, over two-thirds of whom were American citizens. Two of these centers were in the Arkansas Delta, one at Rohwer in Desha County, and the other at Jerome in sections of Chicot and Drew counties. Over 16,000 Japanese Americans were incarcerated in these two centers between October 1942 and November 1945. Private Winston Laughlin was a soldier in the United States military during World War II. He was in Company B, 30th Engineers in Fort Belvoir, Virginia.

Company B 30th Engineers
(GNQ) TOPOGRAPHIC BN. FORT BELVOIR, VIRGINIA
Governor Homer Adkins
State of Arkansas
Little Rock, Arkansas
My dear sir:
Last Sunday I came across the following short
item in a Washington, D.C. paper:
"Japanese and their citizenship will be prohibited
from owning land in Arkansas under a bill signed
today by Gov. Homer Adkins. This law is aimed at
thousands of West Coast and Hawaiian Japanese in
Arkansas."
We men now in the service earnestly believe
that such legislation strikes hard at democracy
and at those principles we are attempting to
defend. Surely this does not give equal.
rights to all. Rather it signifies greed, jealousy,
racial and class hatred all of which are the
root of war.
Bear in mind that these Japanese Americans
are as loyal or even more loyal to our flag
than our own people. Those of Japanese descent
now in our military training camps are hard
intelligent workers making the most of their
training.
In conclusion I say we must so that which
is fair and right in all things to secure a
lasting peace and to preserve our freedom.
"Do into others as you would have them do
unto you." 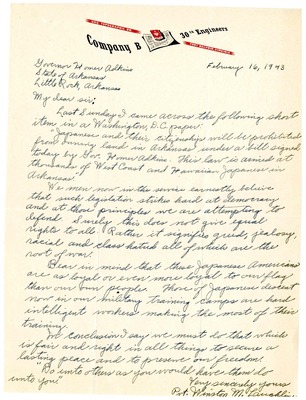