"The Evacuation and Relocation of Japanese Americans" by Joseph Boone Hunter

This speech was written by Joseph Hunter for the Regional Conference of Church Social Workers held in St. Louis, Missouri. The speech, "The Evacuation and Relocation of Japanese Americans" is a four-page document about the individuals placed in the camps. Dr. Hunter also gives his opinion about why people of Japanese heritage are being placed in relocation camps. 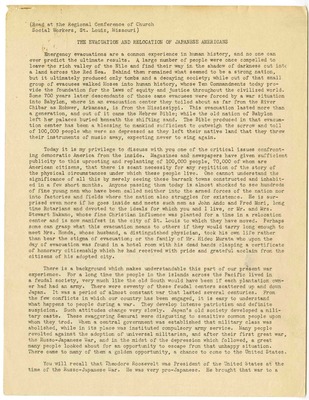